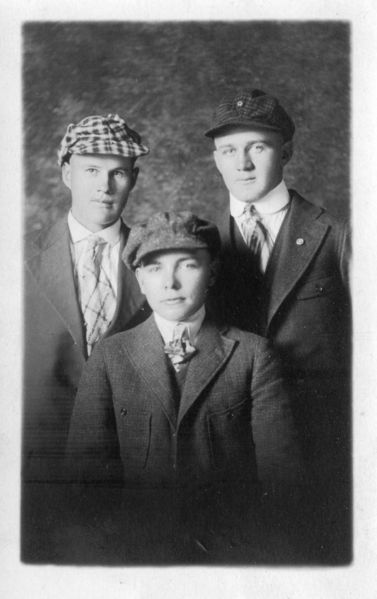 What’s these guys’ stories? Sometime in the 1910s, maybe twenties, three lads got together for a group shot — and it must’ve been important that they be wearing hats. The style of hat is called a ‘newsboy’, ‘Gatsby’ hat, or driving cap, and was popular with the trendy kids of the early 20th century. The button-close breast pockets on the two gents on the right has a very military feel to it, and echoes the late 19th century. The lad on the left shops at a different tailor: sans vest, modern shirtcollar, his collar is lower, wider below the collar on the notched lapel, and is missing the breast pockets. Maybe he’s older, and doesn’t rely on Mom to do his clothes-shopping. Any which way, they’re a sharp looking group of guys.