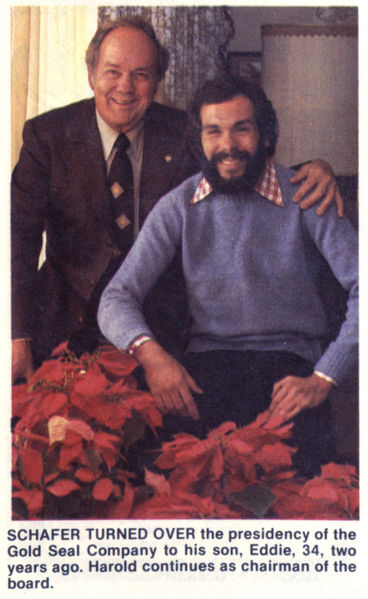 “Eddie” over there on the right, has a tough road ahead of him — despite his shaggy appearance and obese lapels, he’s got big shoes to fill. His dad, a prominent North Dakota businessman, had appointed Eddie to be his successor in taking over the family business. How do you think Eddie did? Would a guy named “Eddie” ever do well in any career other than car sales or running a pawn shop?

As president of Gold Seal, Eddie was in charge of the Mr. Bubble fortune, but it didn’t take long to drop the childish suffix. Harold Schafer’s son, now just “Ed Schafer”, went on to be North Dakota’s governor for most of the nineties — only 11 years after this photo was taken. He remained politically active after his term, and just recently George W Bush appointed Schafer to the position of Secretary of Agriculture. Here, have a look at Eddie today: he’s come a long way from a goofy smile and gingham dress-shirts.