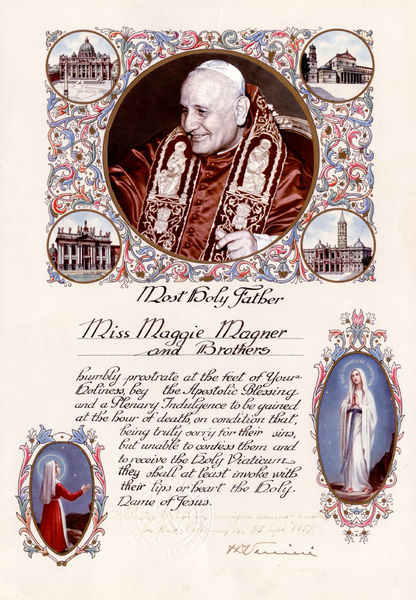 Oh, the title of this post is definitely an exaggeration: Catholicism has no ‘get out of jail free’ card, but the Plenary Indulgence is about as close as you can get. There’s two kinds of indulgences: partial and plenary. A partial indulgence isn’t much more than you get for going to confession regularly — it covers absolution of some sins at death, providing forgiveness for the sins was achieved. Plenary Indulgences are the whole kit and caboodle: You’ve confessed, completed acts proving your penitence, and you’ve been forgiven of your sins — mortal and venial — and you get all of your forgiven sins left at the door upon death. In usual Catholic strangeness, it won’t keep you from Hell, if you’ve been that bad — it just removes the purgatory step in removal of sin. If you’re that goody-goody you’ve qualified for a Plenary Indulgence, it’s unlikely you’ve ever been headed South.

Miss Maggie Magner, whomever she may be — and her brothers, whomever they might be — achieved the Plenary Indulgence on the 25th of September, 1959. I hope she wasn’t too young, what with the ‘Miss’ salutation, because indulgences only count for past transgressions, not future sins, or else you’ve got to earn a new indulgence for those ones. Earning the Plenary Indulgence means that she and the siblings get “the Apostolic Blessing and a Plenary Indulgence to be gained at the hour of death, on condition that, being truly sorry for their sins, but unable to confess them and to receive the Holy Viaticum they shall at least invoke with their lips or heat the Holy Name of Jesus.” This is where the traditional “death bed confession” comes in to play: people who want confession, communion (the ‘viaticum‘), and blessing at death are trying a last-minute end-around to cleanse them of sin. People obtaining the Plenary Indulgence are forward-thinkers: get the death-bed confession out of the way while you’re nice and healthy, and all you have to do at death is have Jesus in your heart.

The Plenary Indulgence has a rocky past: once upon a time, people with deep pockets would buy their salvation without having to meet the faith-based requirements. The church put a stop to that in the 16th century, but lots of people (devoted Catholics included) think indulgences were done away with at that time. Not so — you could have earned a Plenary Indulgence last month, thanks to our Lady of Lourdes turning 150. If you thought it was funny that the church offered an indulgence for a church’s anniversary in the Kevin Smith movie Dogma, don’t laugh, it’s completely possible — you can earn indulgences for all kinds of things still today if the empowered person decrees it so. The rules have done away with the financial aspect, but retain the penitence and forgiveness.

I was originally rather suspicious of Miss Magner’s indulgence: the forgiveness of unnamed brothers who get to piggyback on Maggie’s penitence (which is against the rules unless they’re already dead), the lack of explanation of how she earned the indulgence, the obviously boiler-plate text…I figured it was some scam artist preying on old Catholic ladies. There is a very official embossed seal on the indulgence, containing the seal of the Holy See — that’s gotta make it Pope-approved — from the office of “Magister Sacrarum Largitionum Pont. Max.” Uh, that roughly translates to the treasurer of the Pope’s income. Maybe monetary gifts do have something to do with it. I don’t mean to impugn Miss Magner’s intentions, but I’d hate to find out that God has a special Hell for people who try to buy a quick path to Heaven.

Miss Maggie Magner’s indulgence lives in a sacred place in our home: in the bathroom, above the toilet.

Oh, that smiley guy in the middle? That’s Pope John XXIII — he was pope just for a couple years, dying in office (or is in situ more appropriate?) . They must’ve been planning for his demise, because his photo isn’t printed on the Indulgence: it’s a cut-out photo glued over a blank circle.

Sidenote: In trying to figure out what popes occurred when, I discovered why Wikipedia is such an excellent resource: they have a list of sexually active popes. Sadly, there haven’t been any in a couple hundred years…but we can always hope!