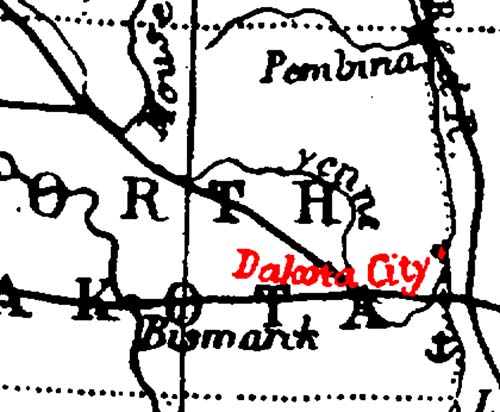 Greetings from scenic Dakota City, North Dakota! It took a little research to figure out what the cartographer was going off of, but the issue may be the result of lazy mapmaking. The full-sized map comes from the Harmsworth Self-Educator, a British encyclopedia from the 1910s. On closer examination, it’s odd to see a river called the “Yenne” running curling around the eastern half of the state — that is actually the “Sheyenne River”, which had at some point lost the first part of its name. The mapmaker who produced the map during the 1890s was copying off a map about 40 years older. “Dakota City” was a small settlement, just north of the Sheyenne/Red River confluence about ten miles north of Fargo, north of Harwood’s current townsite, established in the 1850s. According to Origins of North Dakota Place Names by Mary Ann Barnes Williams, “In 1895, one log cabin stood at the crossing of the Red River, just opposite LaFayette, Minn., on the Dakota side…known as Dakota City.” That one lone log cabin was occupied in the 1860s by “Monsieur Marchaud, a French Canadian, his Chippewa wife and twelve children,” according to Seat of the Empire by Charles Coffin. Dakota City, its neighbor Lafayette, and numerous other small townsites never succeeded in reaching actual town status, disappearing well before this map was published.