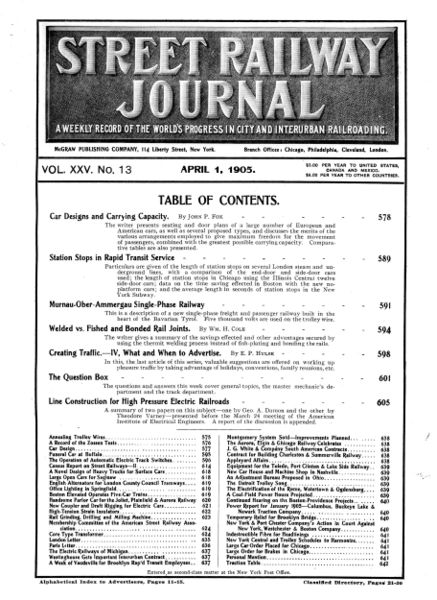 On April 1 1905, railwaymen around the world were pleased to find this issue of Street Railway Journal waiting for them. The magazine contains news and photos regarding municipal electric railways, such as trolleycars — none of that high-falootin’ long-distance steam railroading here!

Industry magazines have been a moneymaker for quite some time; their market is niche, they can quickly provide demographics for advertisers, and since they’re quite often free, they’re guaranteed to get into the hands of the people advertisers want to see it. You can get free industry magazines, too: I get emailed offers all the time, because I signed up for one, and now they’ve got me. Stuff on chemical processing, digital-optical equipment, modern quality control processes, and internet technology. Those are today’s hot, up-and-coming technologies: in 1905, the world of short-line railroads was The Future. You may not realize it, but the industry is still around: subways, the El, metro light transit, they’re all evolved from the electric urban trolleycars of 1905. Following the progression of technology, the Street Railway Journal joined with the Electric Railway Review to become the Electric Railway Journal in 1908, and then the Transit Journal in 1932.

Where’s the rest of the magazine? I’m in the process of scanning it; it’ll be available here, and via LuLu like the Fallout Shelter booklet.