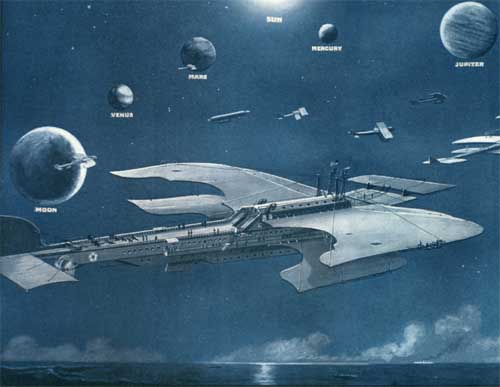 If these amazing craft could actually reach the impressive speed of two miles per minute (120mph), how long would it take to reach the sun? Over fifty years, or so says the margin notes in the original. I have never seen such a wonderful portmanteau of craft-shapes compiled into a single speculative spacecraft: the body is like that of a steamship, front-weighted like an airplane, with airelons and control surfaces both fore (like the Wright flyer) and aft (like most airplanes) — and not only did the artist theorize a single spacefaring airship, he or she put together several designs of varying shape, including a space-faring zeppelin in the distance. It also appears that the “wing-like” surfaces were not functional, as you’d expect for a spacecraft: if you look closely, there are observation decks and tiny people at the edges. My use of the word “Steam-powered” is purely an assumption based on the time period; the features that look like smokestacks are supports for the wings; I cannot see any outward evidence of the ship’s power source. Based on calculations of time-periods, this was published around 1918 or 1919, so I assume the painting was done shortly before. (Want wallpaper of this image? here’s normal and widescreen.) From Our Wonder World.