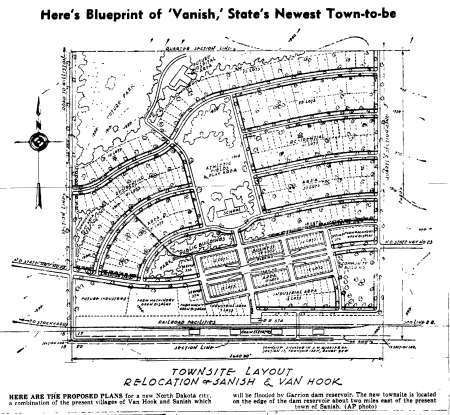 In the early 1950s the Garrison Dam was well under construction, and the government was working on accommodating several communities that were about to be soaked by the newly-formed Lake Sakakawea. Two villages, Van Hook and Sanish, were only a few miles apart with a little ridge of high land between them, so a new town was platted out in the middle. The media wittily called the new town Vanish, a play on Sanish’s name and its unavoidable fate, but there’s no “Vanish, ND” on the maps today. When you lay the map below over nearby towns to figure out which one this is, you realize that the government was far less witty than the newspapers. The powers-that-be named the new town…New Town.