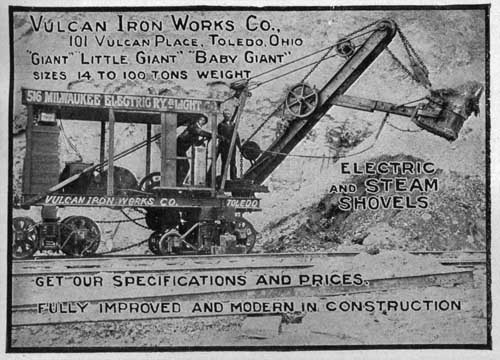 As technology changes, sometimes we get stuck on old terminology; we “dial” a phone, the first TV channel is “2”, and we flatten things with a “steamroller”.  Most steamrollers today, of course, are gas or diesel powered, but they’re still ‘steam’ to us.   Steam-power ran most construction machinery in the 19th century, but slowly faded out as modern power systems became reliable.  I still call big loaders “steamshovels”, even though they haven’t been steam-powered in a hundred years – but, unlike many other forms of technology, steamshovels took a leap to electricity early on.  In fact, a lot of heavy machinery was (and still is) electric, because distance and freedom of movement wasn’t as big a deal, and effectively ‘outsourcing’ power generation reduced weight and complexity.  Vulcan Iron Works produced steam shovels since the 1890s, and in this 1905 ad they were showing their steps into The Technology of Tomorrow: Electric Shovels.   Vulcan was bought by Bucyrus five years later, and they’re still in making mining equipment today, although under the Caterpillar name.  As far as terminology goes, “Electric Shovels” are now known more generically as Power Shovels.