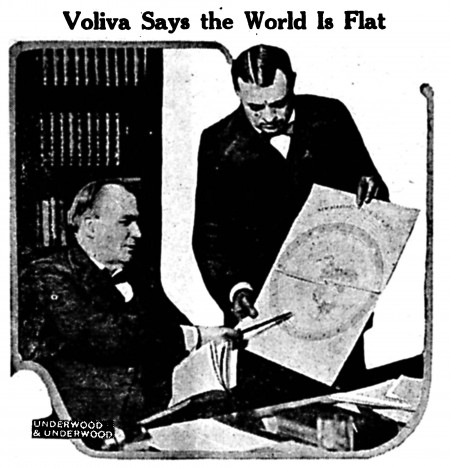 The caption from the 1922 newspaper reads:

Wilbur Glenn Voliva, leader of the religious sect with headquarters at Zion City, Ill, says the earth is flat and that shortly he will prove it by taking a ship and sailing around the outer crust of the earth.  Voliva proposes to captain a ship called the “Zion” and will start on a point at the sixty-fifth meridian and keep going to the starting point.  He says the earth is flat as a pancake and the point we call the North Pole is the center of the earth and there is no South Pole, and that the sixty-fifth meridian is near the rim of the earth.  The photograph shows Voliva (seated) explaining the map to his personal attendant in his office at Zion City.

Zion City was founded by John Dowie after spending a time faith-healing at the Chicago World’s Fair.   Established as a true theocracy, Zion City was meant to attract the sorts of people that would help move their body of faith into a new utopia.

Guys like Wilbur Voliva, who came to Zion City at its inception and became a powerful leader in town, turning the utopian company-town into an economic powerhouse by adding fig bars to its manufacturing business.

The Flat Earth isn’t a new concept, but even in Columbus’ time few actually thought the Earth was flat – it has largely been the domain of crackpots and religious truthers, people more willing to accept the ideas in their head than the truth that was so obviously around them.  Voliva was just one of many, most notably the Square Earth Theory out of Hot Springs, SD,  with the North Pole in the center and an enormous ice wall around the circumference.

In 1931, Voliva was still pushing his flat-earth concept, even though people in airplanes had circumnavigated it in such a way as to eliminate any doubt.  His attempt to sail around the…platter?…doesn’t seem to still be on his docket, though.  Wilbur lived until 1942, unable to prove that the earth was flat.