The promise of flying cars and jetpacks in the 21st century has been around a long, long time: here is a comic from the french journal Le Pele-Mele: 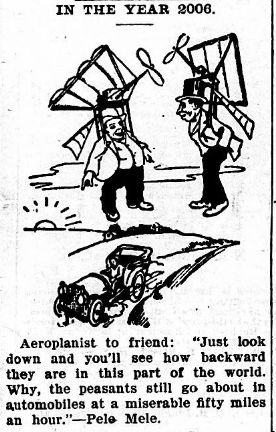 Aeroplanist to friend: “Just look down and you’ll see how backward they are in this part of the world.  Why, the peasants still go about in automobiles at a miserable fifty miles an hour.”

This was found in the 2 August 1906 edition of the Williston Graphic; note that the Wright Brothers made their first flight in December 1903 — a mere three years later, speculation had already grown to the point where, a hundred years hence, there would be no question that only backwards, primitive societies would resort to driving…ick…automobiles.   They were just as wrong about the lasting power of the stovepipe tophat as they were about personal  flight systems.