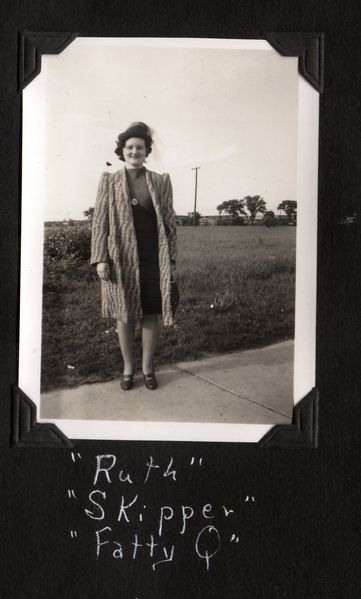 Here, to the right, is Ruth. She once had a photo album of her life in the late 1930s, which I’ve started scanning recently. On the second page of the album, she has a series of captioned photos captioned as a dramatis personae, identifying the players in her life. Her self-portrait includes several nicknames — “Fatty Q” being one of them. While not the lithest of ingenues, Ruth isn’t obese, so that might be why she’s accepted the nickname without offense. The nickname of ‘Skipper’ is interesting, too. The two things we associate ‘skipper’ with — the fat guy on Gilligan’s Island, and Barbie’s sister — were decades away from Ruth’s life. Captaining a boat was the main definition, although ‘one who skips’ could mean she either has a slight jump in her step, or maybe she prefers to avoid going to class. Either way, Ruth has two 1930s nicknames that she was proud enough to own to save it for her kids to see: I hope she was still as proud of them years later.