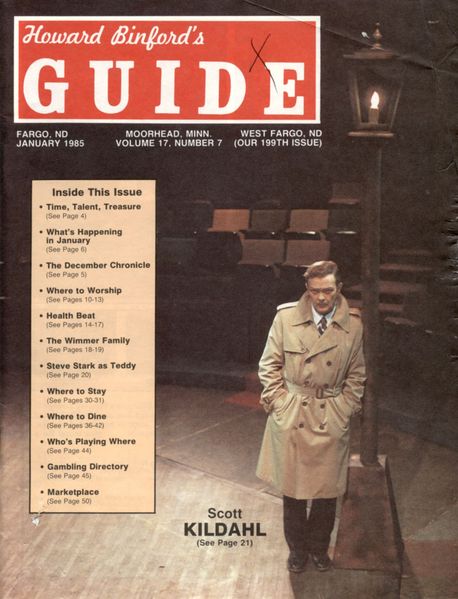 Howard Binford was a journalism instructor at Moorhead State University when he started his magazine: Howard Binford’s Guide, a free publication for tourists or other non-locals providing handy lists of places to eat and sleep, who’s performing in town, and other things of interest in the Fargo-Moorhead area. The magazine ran from 1968 until Binford died in 1989, with some changes throughout (as you’d expect in over 20 years of publishing), but the magazine kept its content and tone through the years. The magazine was sold to Kaye’s printing in 1986, and after Binford’s passing Kaye’s continued publishing as “Fargo-Moorhead Magazine” — after which they, themselves, were bought by the Fargo Forum. The magazine started in ’68 by a teacher continues today through the largest regional publisher in the Red River Valley.

Each Guide had a profile or interview with some local dignitary; hardly a whos-who of international fame, Binford wrote about an interesting group of local religious leaders, businessmen, regional government, and amateur performers.