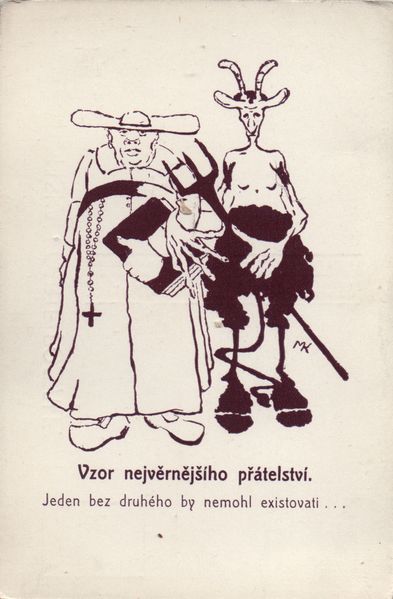 This is the last of the atheistic Freethought postcards I got at an antique show a few months ago. It’s the least witty or thoughtful of the three, but it was the hardest to translate. We’ve got a priest and a devil, arm in arm, looking a little displeased, but neither is fighting it. The first line reads, “Example of an extreme friendship”; the second says, “A pair who exist due to afflictions.” This sentiment is similar to the first card, an attitude that the church preys on people who aren’t giving their condition enough thought and trusting in religion. It’s an odd thing to be anti-church, while using the church’s boogey-man as the reson for the comparison, but, hey, it works. Me, I personally really like the stylized devil he drew — in today’s modern culture, we almost universally show a “Mephistopheles Dracula”, a red-skinned suave gentleman with a van-dyke beard, stylish cape, and tiny horns on the forehead. Or, we depict Satan like the Incredible Hulk, with huge teeth and bulging muscles. This Czech devil (probably intentionally) looks ill and weak. A fat, well-fed cleric and an impotent devil? That probably meant more than a weak analogy.