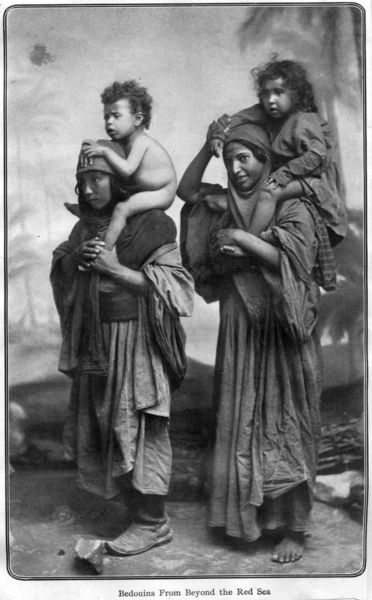 This photo, from the Pennsylvania Report Scrapbook, depicts “Bedouins from beyond the Red Sea“. The photo was clipped from some other source, and judging from the paper it’s on and what I can see of it, the photo was cut from a magazine. As the rest of the photos are from no later than 1904, we can place it quite comfortably in the late 1800s or very early 20th century. Bedouins, as you may know, were nomadic herders in northern africa and the arabic regions. Both appear to be women, with children riding on their shoulders (the kid on the left is rather naked), while the woman on the right has no shoes. For as nomadic as the bedouins were, I’d have thought it more difficult to find some willing to stand still in front of a stock backdrop for a family photo.