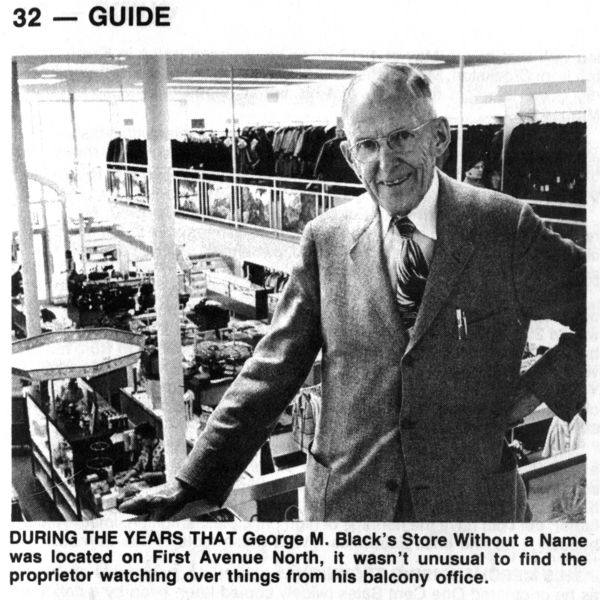 Meet George M Black. The big building on Broadway, the one sprouting up from Elm Tree Square today, bear this gentleman’s name. In 1912, Black opened up his own department store — Black’s — on that spot and began buying up the surrounding property. Black sold his store to Sears and used the money to build the Black Building — but he wasn’t out of the department store racket yet.

The photo above, scanned from a Binford Guide article about the sale of the Black Building in ’86, is of Black overlooking his post-1929 department store. Black had sold his previous store to Sears lock, stock, barrel, and name, resulting in a guy with retail smarts but no catchy name anymore. His solution: call his new shop The Store Without A Name. The marketing was witty — he held a contest to pick a new name, but to everyone’s surprise the majority of the votes went to keep the department store nameless. One bright suggestion was to abbreviate it to the ‘Swan’, but that didn’t have the sticking power of the unnammed shop. The Store Without A Name is now the parking lot next to the Avalon; the Black Building ceased being a department store when Sears moved out to the mall in ’76.