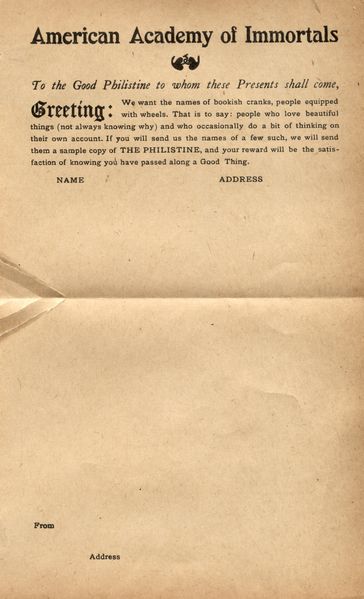 In the old days, when a nation’s art and culture were monitored and controlled by the government in power, many added their greatest artistic minds to a roster called the Academy of Immortals.

American popular culture in the 19th century, a young nation with a rebellious streak, prided itself on being a country of the common man: our government was chosen by the unwashed masses (artfully referred to as the “host of Philistia” by critics), our popular music — including our freaking national anthem — were based on barroom tunes, and our art was crude, functional, and primitive. What place does an Academy of Immortals have in our fair, young nation?

By the late 19th century, it was as a cultural jab at Europe. The membership of our country’s Immortals was commonly seen as open to anybody with half a mind to participate: a country of the people, an art-world of the people. Elbert Hubbard, one of my favorite people these days, called his magazine the Philistine in honor of the free-thinking common man who has no time for culture handed down by ivory towers. His subscribers could, for a $10 lifetime membership, receive whatever back-issues he had on hand, and up to 99 years of free stuff — and each one was granted membership in his American Academy of Immortals. Not content to limit membership to existing fans, Hubbard sent out the sheet (seen on the right), to encourage his fans to turn in their buddies. What member of the proletariat did not deserve to be part of an American Academy of Immortals?