After the juvenile amusement at the flowery term “jerking lightning’ that appeared in Dakota Death Trip a few months ago,  here’s an equally Zeus-like term from 1882: 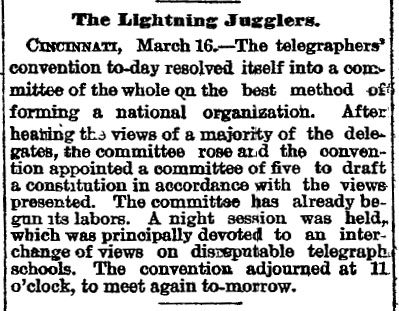 Cincinnati, March 16.– The telegraphers’ convention to-day resolved itself into a committee of the whole on the best method of forming a national organization.  After hearing the views of a majority of the delegates, the committee rose and the convention appointed a committee of five to draft a constitution in accordance with the views presented.   The committee has already begun its labors.  A night session was held, which was principally devoted to an interchange of views on disreputable telegraph schools.  The convention adjourned at 11 o’clock, to meet again to-morrow.

The awe regarding the nascent understanding of electricity — noting that electric lights were a pretty new idea, making telegraphy most people’s only personal interaction with loose electrons  — is clearly evident in the nicknames given to telegraph operators: they were the IT departments of the 19th century.