A few years ago I bought a small box containing ‘magic lantern‘ slides, small glass plates with photographs on them, at an antique store in Minnesota.  They’re essentially for use in the slide-projector of the late 19th century and early 20th century, a way to share photos with an audience.   Five plates are in the box, and in the interest of procrastinating other work, I decided to finally scan them today.

Here’s one of the most impressive: the Chateau de Sans-Souci:

You’ll need to zoom in to see the full detail.  Unfortunately the low contrast makes some of the distant objects hard to see — thankfully, the  Sanssouci Palance is still there.

The internet is an amazing place, where I can, from my comfy office find a photo taken a hundred years later, from almost the same vantage point: 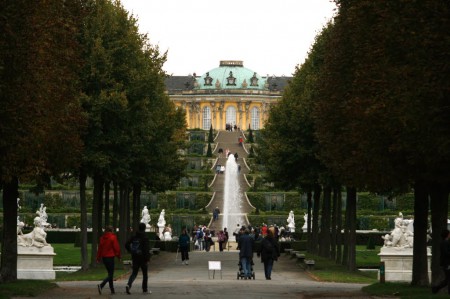 One photo, taken on a glass plate smeared with a photosensitive chemical, mounted in a rudimentary camera made mostly of wood; the other created by photons striking a tiny sliver of silicon, housed in plastic and metal box made by a country that was still buried in feudalism when the first photo was taken.   Here’s a map; the earlier photo was taken further south, you can see the pathway entrance on the right.   The recent photo appears to have been taken from just south of the intersection.  Don’t get me started on the fact that I can pull up an aerial photo from my computer and map out locations…

After two world wars and a century of rain and snow and vandals, Victorians and Millenials looking at the same things as though it barely changed (the urn’s gone, unfortunately).  Here’s a closeup of that distinct statue on the right, the Sphinx by Georg Ebengech, carved in 1755: 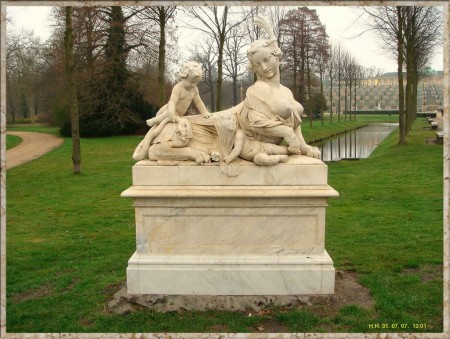