Oh, Sergeant de Badal, I hope you have a way to pay your friend back for what you borrowed — from the Bismarck Tri-Weekly Tribune, 3/26/1878: 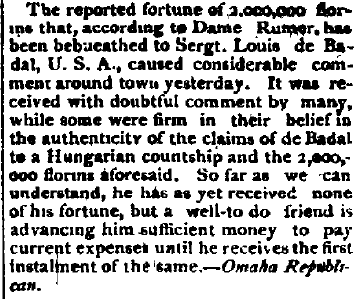 “The reported fortune of 2,000,000 florins that, according to Dame Rumer, has been bequeathed to Sergt. Louis de Badal, U.S.A., caused considerable comment around town yesterday. It was received with doubtful comment by many, while some were firm in their belief in the authenticity of the claims of de Badal to a Hungarian countship and the 2,000,000 florins aforesaid. So far as we can understand, he has as yet received none of his fortune, but a well-to do friend is advancing him sufficient money to pay current expenses until he receives the first installment of the same.–Omaha Republican.”

Now that I know what to look for, these stories jump out at me these days — the clues are an enormous fortune, left by a distant relative to someone with a foreign name living in the United States, in a Dutch currency: that’s the Amsterdam Fortune Scam right there.   This is the earliest one I’ve found thus far, hailing from 1878.   de Badal was still receiving a pension from the military in 1901 and passed away in 1905 or 1906 according to the Washington Post.